Can a Social Media Platform Make Money without Advertising?

There’s been a concern about social media platforms and if they're able to monetize without advertising. Recently, Facebook was in the headlines because they wanted their users to use their real names and they shut down a lot of user accounts, which stirred up controversy, and they since issued an apology. As a result, we wanted to elaborate on Ello, an alternative social network platform for people who are starting to grow tired of Facebook's policies, social media, and the evolution of Facebook. In this Daily Brown Bag, you’ll learn what Ello is, how Ello differs from Facebook, and discover whether or not a social media platform can make money without advertising.

Hello and welcome to the Daily Brown Bag. Today, we're going to be talking about whether social networks have to make money to be a going concern. I'm Chad Hill and I'm joined by Adam Stetzer.

Yeah, welcome to the Daily Brown Brown Bag. Good afternoon, Chad. It's a great conversation, Chad. I think we've been in this industry long enough that we're starting to see some repeats and some patterns here. But today, we're talking about talk Ello. Just kind of yellow without the Y is how you pronounce this which apparently is this new flavor of the year of social network. They call themselves simple, beautiful, and ad-free. They've been the talk of social media recently, Chad, particularly because there's been a controversy over at Facebook that's been all over the Internet - we're covering today- involving the L.G.B.T. community. Apparently a number of folks in that community don't use their real name on Facebook. They're not comfortable using it on social media platforms and Facebook was enforcing their must use your real name and verify identity policy and shut down a lot of accounts, including quite a few people in the L.G.B.T. community, which stirred up this controversy.

Now, Facebook has since issued an apology. But, you know, what is happening here is a whole discussion about Ello as an alternative for those who are starting to grow tired of Facebook's policies and the evolution of Facebook, which obviously, we've all seen, has become much more commercial. 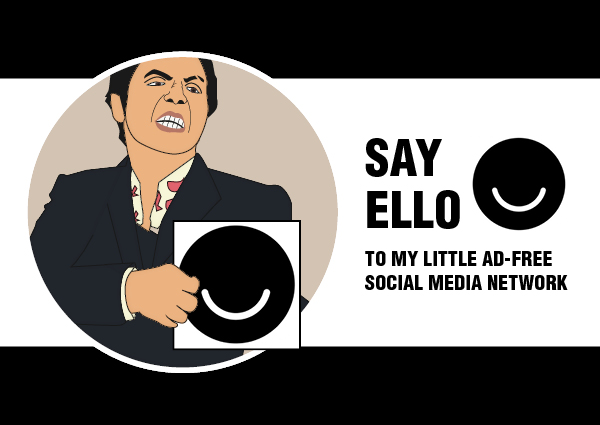 So in Ello, this social media network promises - and this is interesting to be covering probably for years for now - that they will have no advertising, do no data mining, it'd have no algorithms that decide what you get to see. They're going to be simple, uncluttered, and keep everything in chronological order. Interesting. What do we know about this social media network- Ello, Chad?

Well, we know that Ello has been around a little while. This social media platform started and it's really been a favorite of artists and designers as, you know, often people setting trends are from those groups. Ello rolled out with about 90 people in 2013. It now has a public site, but it's by invitation only. Again, these are things that we remember on the days of Facebook. At their beginning, you had to have an invitation, startup universities, and then they kind of grew from there. But when you do sign up, you have to agree to their manifesto. These are always great things. There's a lot of passion with Ello at this point.

But there's three main points. Basically it says you have to agree that your social network is owned by advertisers and that every little thing you do on this social media site is tracked and that data is sold and used by advertisers and you're not a product. So I think we all will probably agree with that. But I think a lot of people just like the convenience of, in some cases, using that sort of social networks because that's where the people are and that's what social media networks are all about. You want your friends to be in there.

You know, I guess this is sort of also interesting because it is for this un-startup type company. Paul Budnitz - he lives in Vermont and he owns a bike store - is the founder of the company, Ello. He basically is really again on this idea that its... on his manifesto that, you know, Facebook is essentially the Yellow Pages of social media networking and that's not where he and people that are on Ello want to be. Ello is free. There are some paid add-ons to do more advanced things. Then again, I guess, again it really comes down to that there will have to be some way to monetize and pay for the servers and the data because we know that stuff is very expensive. But what Budnitz says is that, you know, they don't need to make money off of everyone. They're not trying to. That's not really what they're building here. So a very interesting story.

I think that the big question here is that, you know, if the social media platform, Ello, does take off, can it survive as in in its freemium model? I know that people have talked about on the Facebook site and I think, Adam, we even talked about this a number of years ago that, you know, this big question of advertising versus paying for a service. Everyone is just so used to things being free with social media platforms, but nothing's really free. Free, it's free to use the social media platform, Facebook, today because essentially you are the product. You are paying by selling your information through social media platforms. So if people are willing, if they're now seeing the negativity that was, of course, when Facebook was getting and that's before the N.S.A. For a lot of these privacy hacks, people's credit cards getting stolen all the time. So you know, maybe we're at a point now where people are ready to start paying for this type of service. I guess just to wrap up here, if you are a business, watching this today thinking, "You know, should I jump on the bandwagon and jump on Ello?" Probably not. I mean, maybe if your target client is the designer, the trendsetter out there, maybe it's time to get on the social media platform, Ello. But for mainstream businesses, most of the people that we work with, the audience this social media platform really isn't big enough yet, and so rather than jump out there and have a yet another thing to manage and worry about, we'd say, you know, stay with the places where the bigger audiences are.

Well, fascinating to watch this trend and see yet another social media network coming up. I think things will be different. It will be interesting to watch. I don't think another Facebook starting today would probably have the same results financially or with Wall Street and the investors. It seems like Ello is really taking more of a page out of the Craigslist grassroots approach versus, as you said, this is not the startup. It's the un-startup, which, you know, me, I think that's really cool. I'd like to watch it. So let's keep an eye on this one.

We like your comments. Have you heard of Ello? Have you used this social media platform? What are your thoughts? Are you getting tired of Facebook and how commercial it's becoming? Drop us a comment on our blog, better yet subscribe to our YouTube channel, and we'll meet you back here on Monday for another Brown Bag.