Should You Be Worried About Negative SEO?

Negative SEO is a hot topic and Barry Schwartz recently talked about negative SEO. We wanted to cover negative SEO due to this recent news and our position changing on this topic, as a result of Penguin updates. Chad and Adam discuss if a link can become toxic, what small businesses can do to start taking a more regular review of their backlinks, and the importance of building quality links. In this Daily Brown Bag, you’ll also learn what negative SEO is, statistics on negative SEO, and more on SEO that you’ll want to know!

Hello and welcome to the daily brown bag. Today we're going to be talking about negative SEO. I'm Chad Hill and I'm joined by Adam Stetzer.

Hey good afternoon Chad, welcome to the brown bag. Negative SEO is a real hot topic and Barry Schwartz has been talking about it recently. We're covering some of what he's said as well as our own background on the topic. Chad, he's come out with an interesting position, before I get to that though, I want to just answer the question that some people new to this topic are probably asking which is: what is negative SEO? After all, this is when someone tries to lower your site's ranking and the most common tactic is by using manipulative links to you which then presents to Google as you masquerading as you trying to increase your ranking. Google doesn't like that, devalues those links, devalues other links because they see your attempts to manipulate which of course it really isn't you and therefore hurts your site.

Now Barry Schwartz is saying that he wants Google to take more responsibility in this area and be more transparent about the effectiveness of negative SEO. It's a great topic, it's been talked about in the SEO industry for years and I know for years Chad our position was you don't need to worry about it because we thought Google had a pretty good handle on it and the way they had their algorithm configured it really couldn't hurt you. I think our position is changing rapidly particularly with the penguin update in 2013 and now this follow up one in 2014.

And the SEO industry is changing a bit too. When Barry Schwartz talked about this he was talking about how Google has been downplaying how much it actually happens. He thinks it happens more than Google wants to realize. And even as I said, he really wants Google to do something about it. And here's a little bit of data to back up his position and I think he supports our own. He conducted a survey earlier this summer through SEO Round Table and one of the polls that he does every so often. And here are some of the results from those that said they actually tried negative SEO and this is from the SEO community. 11% said they were not able to negatively impact another site, 36% said they were sometimes able to negatively impact another site and 53% said they were able to negatively impact another site. So that's more than half reporting in 2014 the negative SEO is something they're able to do. So I guess it begs this question we ask over and over again, can a link really become toxic and really hurt me Chad?

It's a good question Adam and I think again we're sort of framing this up in the small business context where there aren't as much link velocity to those websites. These ramped up weird links when it's just me when I look at people who had issues, it always seems like they had so few links going that these things pop up and it really does beg the question, is it possible? Of course Google says it's not impossible but it's rare, and I think that through the years when people gone back and listen to Matt Cutts and other people talk about negative SEO. That I think it times pretty well Adam actually with the penguin update really around last year. That has gone from its never possible to its sometimes possible. And so again, Matt Cutts has even come out and said months ago it's not impossible, but it's extremely difficult. So I think that again there's a lot of signs that say that this is probably 100% transparent because Google rolled out the disavow tool back in 2012.

And for those of you who don't know what the disavow tool is, it's a way for you to go into webmaster tools, which is Google's sort of control panel of what it sees about your website. And say," Hey don't count these links that I analyzed and found that I don't want to vouch for so don't include this when you're determining whether or not I'm relevant in your search results." So that's clearly one sign that they want you to police your links, the disavow tool wouldn't exist if it wasn't possible. And then again back in August, Marie Haynes went back and analyzed all the transcript of Matt Cutts and John Mueller on this topic. And she took a less alarming stance than Schwartz, she thought it was pretty clear that maybe it wasn't as big of a deal.

But again you see these stats from Schwartz where he says that over half of his people that he polled said it was possible to do. So I think that she shared her conclusions on Moz where she said that by and large, the negative SEO cases that Google had looked at tended to be cases where the client already had the bad links maybe from a prior agency. So therefore it wasn't really an instance of someone proactively doing negative SEO. But I think at the end, she did say that the kicker of this whole thing is if you do see bad links, make sure you disavow. So we're still sort of confused about where that goes.

So that really leads us to what should we do? I think that really as you said Adam, that our position is changing on this. We used to say that it's really hard, not possible. But I think after watching these last two penguin updates, Penguin 2.1 and Penguin 3.0, I think that it is important for small businesses to start taking a more regular review of their backlinks and maintaining a disavow tool for those that they find really aren't the right ones and aren't helping their website. I think again, you always clearly can't rely on disavowing; you need to focus on building quality links and often times the people who are impacted, probably more susceptible to negative SEO, are those who only have bad links pointed at them. They're not actually working on building and relationships and earning links back to the websites from reputable sources. So then the bad outweighs the good, it's hard to tell how much good you need to outweigh the bad, but that's probably a topic for another debate.

Again some real quick red flags is a big topic, one I think we're going to be diving into more. When you do look at backlinks, your webmaster or some of the other data third party data sources out there. You want to look for foreign links; especially Russian links is a pretty common one that you'll see. A lot of weird Russian links to you, spammy links where you look at it and you can't figure out what the page is all about. Have no idea why you're being linked to by that page. Again nonsensical blog posts, I saw one the other day where an affiliate site was scraping a client's website, putting their content on the website.

And then actually still having a link to the client, really weird stuff. Clearly didn't make sense, you want to disavow those and then anytime when there's a lot of heavily anchored text, that's probably a sign of a more nefarious SEO attack. Where someone is actually taking your money keywords and building a bunch of bad links. So anyway, the issue isn't so much panicking if you see one or two, it's the big trends and at the end of the day, I think the final question we have for today is whether or not it makes sense to engage in negative SEO. I can tell you from me personally, I'm sure for you Adam, that there is no way that I would ever want to be involved in actually trying to hurt someone's website. It's not really the reason I like SEO and that we do what we do every day. So for me the answer is certainty no. Obviously there are always people out there willing to do anything to make a buck.

I think that's a great summary and I think you hit a lot of important themes there. I know a lot of people are trying to figure out what did penguin mean and what is this negative SEO all about? And I think you cited some very simple answers. I know Rand Fishkin had a great white board Friday last week that we circulated pretty widely. Chad which addresses this issue that you need to be earning new good backlinks the right way where there is editorial link control. And you really earned it with some stellar on site content, I think that's a much watched.

And what Barry Schwartz is saying about the negative SEO is really a lot worse than you think and Google is downplaying it is another voice you need to listen to. So you need to have this balance approach where you're not paranoid or overly worried, but you are evaluating your backlink profile and our position has changed on that. And you're also out there producing great content and doing great content marketing. Well that's our coverage for today; we hope that this was a helpful Brown Bag. We'd ask that you drop us any questions you have and of course subscribe. 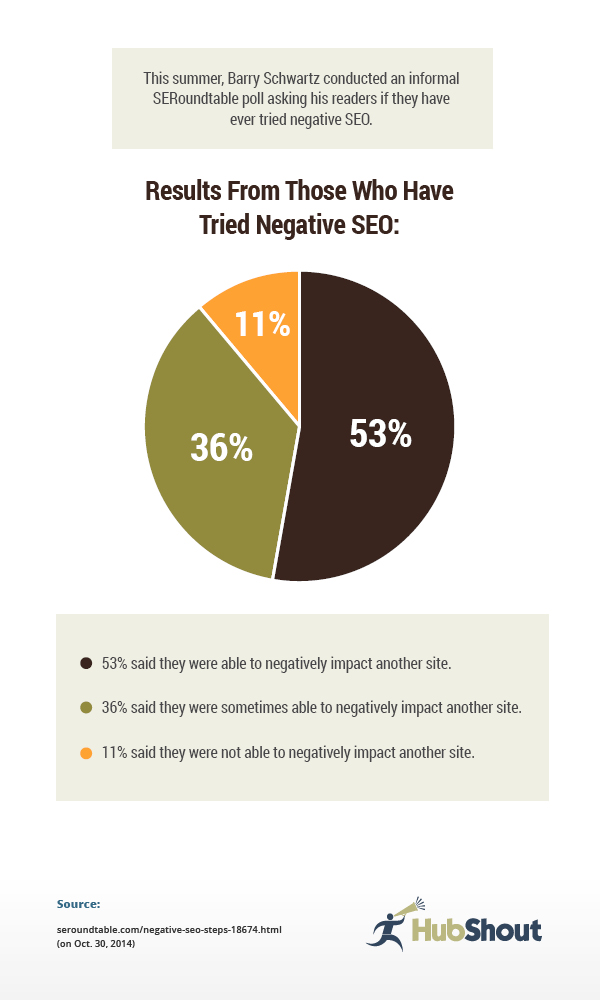