Hello, and welcome to The Daily Brown Bag. Today we're going to be covering Google Panda 4.1. I'm Chad Hill, and I am joined by Adam Stetzer.

Good afternoon, Chad. Welcome to The Brown Bag. It is update season for the Google algorithm, so we're talking about Google Panda 4.1 today. Chad, I expect that we'll be talking about Penguin 3.0 probably in the not-too-distant future because these seem to come together. And as we've noted, they also tend to have high-profile actions against link networking and manipulation sites that they don't like. We heard about that last week, with targeting private blog networks in a very large way. It seems like Google's on the move, which seems to be right on schedule.

The news today here is that they officially announced that Google Panda 4.1 is slowly rolling out and would continue to roll out through early this week. Now again, let's review. Google Panda targets sites with thin or low-quality content. You have to think about it as a sort of on-site analysis, whereas Penguin, the other algorithm update that we've gotten used to hearing from, at least for the last year especially, is looking at back links and trying to discover manipulation on the linking side. So what we're talking about today is Google Panda and thin content. What we know from Google and what they're telling us is that they have "found a few more signals," signals in their algorithm to help identify low-quality content more precisely.

Obviously we don't know what those signals are, and everyone would like to know, but they're going to keep that, of course, top secret. They believe that this will result in a greater diversity of high-quality small, medium sites, sites ranking higher as they remove the things that they find overtly manipulative and not particularly useful for end users, which is always their stated intent. They are saying, Chad, that this impacts 3% to 5% of queries versus the Google Panda 4.0 roll out in May that we covered which was 7.5%, which is a little bigger. This is a smaller release. That's what we know. How is this impacting small businesses?

Searchmetrics, as you mentioned, did a study of at least the last couple days looking at what sites have been impacted and which ones haven't. They put together their winners and their losers. And on the winners side, it seemed that their news, content, and download sites seemed to pop up in specifically sites like babble.com, ivillage, & hotelguides.com. They were all hit; those three sites were all hit by Google Panda 4.0 back in May and actually seem to have turned around and improved positions after the most latest update here.

Some of the losers were gaming, lyrics, and medical content sites. On the list there were yellow.com, free-coloringpages.com, howStuffWorks.com, exacttarget.com. As you said, Adam, I think in general the idea behind Google Panda is that it should be something that's good for small businesses. Some of the sites we just mentioned are these really, really massive sites that have thousands, and in some cases, hundreds of thousands of pages. And they have really studied how they can get content very close to people's search queries and therefore use some of their domain authority to get these very, very thin or low-quality content pages to rank pretty well on the search engines.

All the while, there are these small business websites out there with a lot fewer pages on their website perhaps, and typically actually have spent more time writing that content that are getting pushed out of the searches. With Google Panda, the idea is that it equalizes some of that, gets rid of those thin pages on those really big sites with high domain authority, lets some of the smaller websites with better content into the search results. And that's what we're seeing here.

It's always hard to see. We see some of the big winners, big losers. It'll be interesting to see, Adam, actually what happens in the small business websites that aren't gonna show up on some of these big reports that are being pushed out.

Yep, and our prescription is pretty much always the same, which is you should really be practicing real SEO. You should be focusing on creating good content on your website, not thin content, well-researched content with citations and statistics and a point of view, something that you would want to read and you would want to tweet. We sometimes call it the "tweet test." Would I tweet this? If you don't feel like you would, then don't put it on your site. You need to work a little harder on it. And of course, then, "Build it and they will come" never works.

You need to be out promoting it, but you need to be promoting very carefully. And I'm sure Chad will be talking about Penguin 3.0 right on the heels of this Google Panda 4.1 release very shortly, which of course will call into question how can you seek links. Can you seek links at all? Of course, our answer is do real PR, be trying to get quoted in newspapers, be trying to push some of that great research that you're representing on your site, and get noticed by others and earn a citation, make an interesting video, find ways to get out there through good PR activities.

Well, that's our coverage for Google Panda 4.1. We'd like to hear your comments. What have you been seeing? Do you see some of your sites going up? Are they going down? What do you think's working? As always, we ask you to share this video and subscribe because we'd love to see you back here tomorrow. 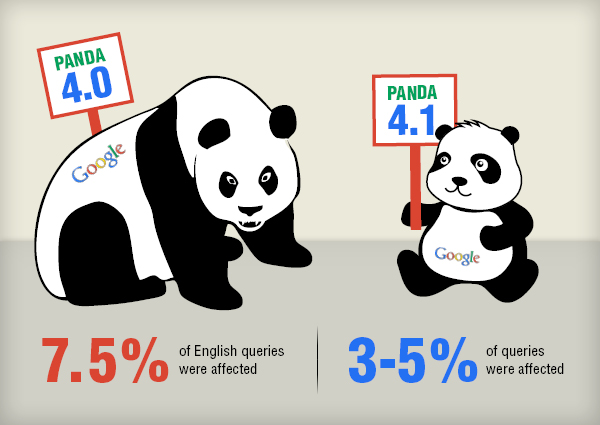