Entering The Matrix: How We Found A New Way Of Working 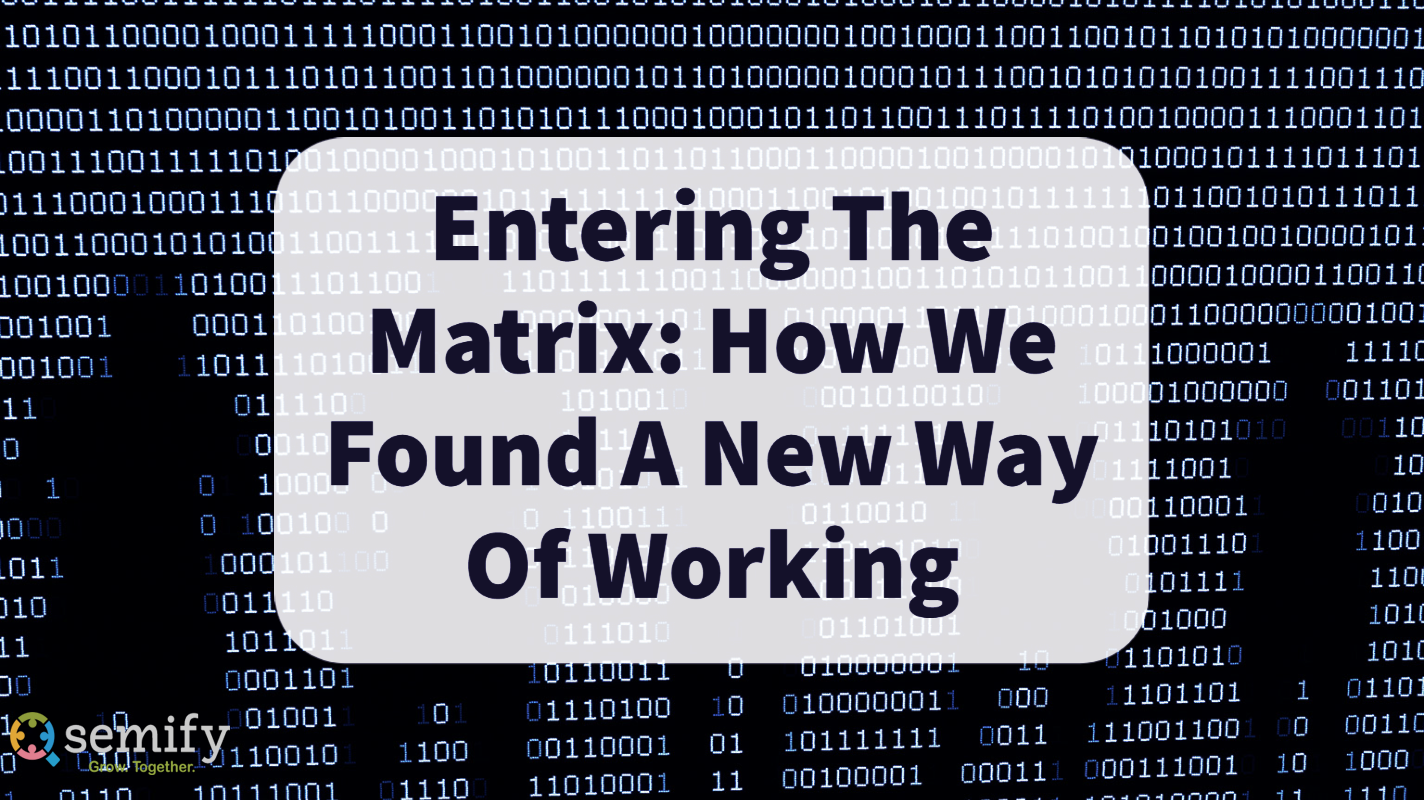 At Semify, we’ve long known that innovation is the name of the game. We know that we don’t have to keep doing something the same way just because that’s the way we’ve been doing it for years. That way of thinking goes for everything at our business, from the way the desks are arranged to how we deliver a product to our clients.

At the beginning of the year, we took a leap of faith in order to focus on the latter. A group of four Semify employees -- one account manager and three writers -- began working as a close team known as the Matrix. The idea was that this group would work solely on the tasks for the account manager’s book of clients. All four Matrix members would take on more responsibilities as editors, web developers, PPC analysts, and more, learning a variety of different skills to help them become experts in all things digital marketing.

Prior to this structure, an account manager’s book of clients was touched by practically everyone in the company at some point. One piece of blog content would have to change hands numerous times as it traveled from the writer to an editor and from there to either the web development team for posting or to the account manager and client for review. If the blog content needed a custom graphic, it would wait in limbo until the graphic designer got the task to create the visual. The blog piece and graphic would see a final pair of hands when it was its turn for the web development team to post it.

When members of the innovation team at Semify took a hard look at this process, they realized that there may be a more efficient way of doing things that fostered much more collaboration between employees at the same time.

The Director of Marketing Innovation, Jeff Shipman, read about a different way of organizing team members in High Output Management by Andy Grove. Known as the Matrix, this structure broke down the barriers between employees that restricted them to certain types of work. The Matrix would create new teams based on the clients a group served rather than the job title of a group, working against the siloed nature of digital marketing.

The goals of the Matrix were simple. We needed to complete tasks by their original due date, maintain a certain revenue per hour and NPS, meet our book growth goal, and uphold a world-class culture. Meeting these goals wasn’t easy at first, but as Matrix members became more confident in their skills achieving them started to be a weekly occurrence. Based on this success, three other Semify employees formed a second Matrix and started working to meet their own goals.

Once we became confident that both Matrixes were completing tasks and delivering products to our clients with the utmost efficiency, we decided to look at how this process stacked up to our traditional one.

Through tracking certain content tasks, we discovered that the Matrix structure delivered onsite blogs more quickly than in the traditional structure by up to two weeks. Members of this structure could also write, edit, and post a featured news article in just one day while the same process done in the traditional method took upwards of a week.

The Net Promoter Score (NPS) of the Matrix has also steadily increased since its inception in January of this year. This score is based on a survey that we send out to our clients to measure their satisfaction with Semify’s services and practices. The NPS of the first Matrix started in the low 30s at the beginning of the year but it now sits at 93. Together, the Matrixes average an NPS of 74 while the teams working in the traditional structure average an NPS of 52.

While there is any number of factors that could influence this growth and we’re unable to isolate only the effects of the Matrix structure, we can know that this new way of organizing our team members hasn’t negatively impacted our clients. As our clients’ satisfaction is our top priority, having a good NPS has given us confidence in the Matrix structure.

With the increase in efficiency and customer satisfaction, the Matrix allows us to accommodate more campaigns. We have seen a revenue per hour consistent with that of team members in the traditional structure and significant book growth since working in the Matrix. The agile nature of this structure has given us the ability to adapt the roles and responsibilities of team members so that we can serve more clients.

Company culture has always been a top priority at Semify. Naturally, we wanted to ensure that the Matrix structure didn’t negatively impact the overall culture and would -- hopefully -- improve it. While we don’t have an official measure of culture for any sub-team because our overall culture survey is anonymous, we do know that Matrix team members have said that they feel more connected to the work they’re doing and closer to the other Matrix members.

We haven’t yet decided what the future holds for the Matrix structure and how it might affect the rest of the company, but we can say that it works. We didn’t know if this large-scale experiment would last six weeks or six months, but by mixing collaboration and innovation and adding a dash of courage, we were able to find a structure that has seen an increase in efficiency, customer satisfaction, book growth, and employee happiness. And we can’t wait to see what happens next.