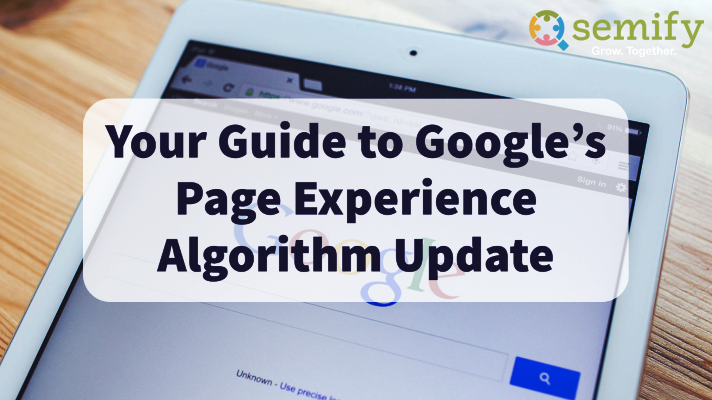 Since sharing information regarding Google’s Page Experience algorithm update in March 2021, we’ve learned that the launch of this update has been slightly delayed.

Before getting into the nitty gritty of this Google algorithm update (including everything related to the new Core Web Vitals ranking factors), you may want to familiarize yourself with the latest developments.

In mid-April 2021, Google officially announced that its forthcoming Page Experience update -- originally intended to take effect in May -- would begin its gradual rollout in mid-June. Google added that the update won’t be fully launched until August, meaning that we’ll likely be seeing adjustments to site rankings throughout the summer.

Google’s statement explained, in part: “You can think of it as if you're adding a flavoring to a food you're preparing. Rather than add the flavor all at once into the mix, we'll be slowly adding it all over this time period.”

According to Google, this gradual approach will give website owners and developers even more time to implement necessary changes to improve page experience. Google has also made a commitment to answering questions and gathering feedback regarding the update. What’s more, they hope that this new rollout time schedule will alleviate some of the panic that’s often been associated with prior algorithm updates.

“As we have said before, while this update is designed to highlight pages that offer great user experiences, page experience remains one of many factors our systems take into account,” Google stated. “Given this, sites generally should not expect drastic changes. In addition, because we're doing this as a gradual rollout, we will be able to monitor for any unexpected or unintended issues.”

For now, this means site owners aren’t likely to see any major shifts in their rankings. Even when the update begins to roll out in a few weeks, you may not see surprising losses or gains. That said, you’ll still want to properly prepare for what this update has in store for us. Keep reading to learn more about the Core Web Vitals SEO effects and how you can guide your clients to maximize their success.

There’s one thing about the internet that you can always depend on: that change is inevitable. Evolution is really the only thing that’s a given -- and that means that business owners and marketers need to stay on their toes if they want to compete.

Although there are certain aspects of digital marketing that have remained crucial to strategy development over the years, user behavior (and even bad behavior among site owners!) will often drive changes. That’s certainly true of adjustments made to Google’s search algorithm, which is chiefly responsible for how websites are ranked in search engine results pages.

In just a couple of months, Google will release its Page Experience algorithm update. While the thought of an algorithm update may send business owners into a panic at first, it’s important to stay calm and stay the course. Remember that Google isn’t out to get you! And if you learn as much as possible about this upcoming update, you’ll be in great shape when Google launches the Page Experience update in May 2021. Let’s dive in and learn about what to expect with this latest algorithm update.

Why Does Google Change Its Algorithm? 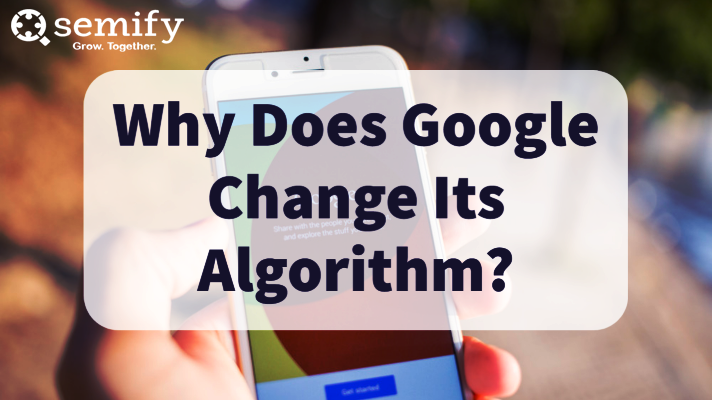 As we mentioned in our recent blog post about the history of Google’s algorithm updates, Google actually makes thousands of changes to its search algorithm each year. Some of these updates are relatively small and may even go unnoticed. Others, including the more infamously-named updates (such as Penguin and Panda), brought about some very powerful changes to how websites are ranked in search engine results pages.

Google’s purpose behind adjusting its algorithm is to better serve web users. Over time, it becomes clear how user behavior has impacted trends or how site owners may be gaming the system in order to receive higher rankings than they really deserve. Ultimately, Google wants to make sure that the needs of searchers are being met. The company adjusts its algorithm all the time to increase the chances that it’ll accomplish that goal.

Of course, Google doesn’t always get it right -- and these changes can sometimes translate to significant consequences for site owners who haven’t necessarily done anything wrong. These changes are meant to improve upon Google’s ability to assign rankings according to the value, relevancy, and authority those sites can offer. It’s certainly not a perfect system, but the fact that Google makes so many adjustments over time means that the team is constantly working to improve those processes.

There’s no doubt that algorithm updates can be a source of frustration for business owners. But these changes really are meant to be in service of the greater good. And as long as you adhere to the best practices known at the time, it’s unlikely (though not impossible) that a single algorithm update will undo all of the hard work you’ve put into your SEO.

What Will Change With the Page Experience Update? 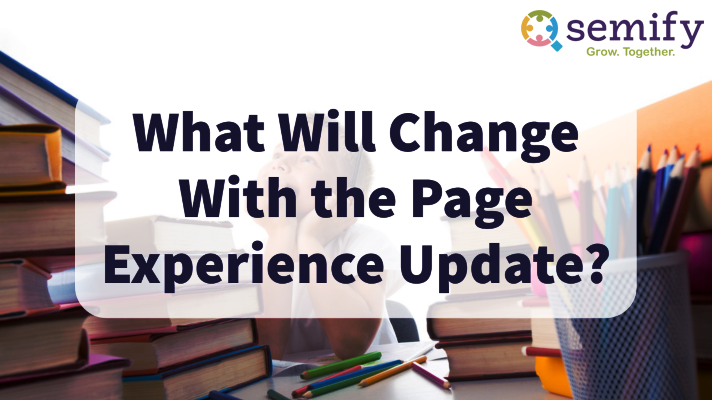 That said, it’s essential that you understand what’s on the horizon. Google has actually released quite a bit of information about its upcoming Page Experience update, which is relatively rare. One of the difficult aspects of algorithm updates is that you may not know they’re coming (or even that they’ve already been released). But with this update, we know a fair amount about what’s going to happen and what’s really going to matter in the eyes of Google.

It’s important to note that these Core Web Vitals ranking factors aren’t the only ones that Google will consider after this algorithm update takes effect. Google will also evaluate page experience based on other search ranking signals, such as mobile-friendly design, HTTPS (SSL certification), safe browsing, and compliance with intrusive interstitial guidelines. Not only do your web pages need to load quickly and consistently, but your site also needs to provide device responsiveness, web security, and unobtrusive design in order to address Google’s chief concerns (and to appeal to human visitors!).

Ultimately, none of these factors are really new. They’ve been around for a long time and have been universally accepted as principles of good site design. However, the Page Experience update clearly tells us that Google will be looking at these features and using them to evaluate site rankings. Before, some of those factors might have merely been assumed or considered common sense; now, they’re laid out in black and white so there’s no confusion about what Google wants to see.

Is Page Experience the Only Thing That Matters? 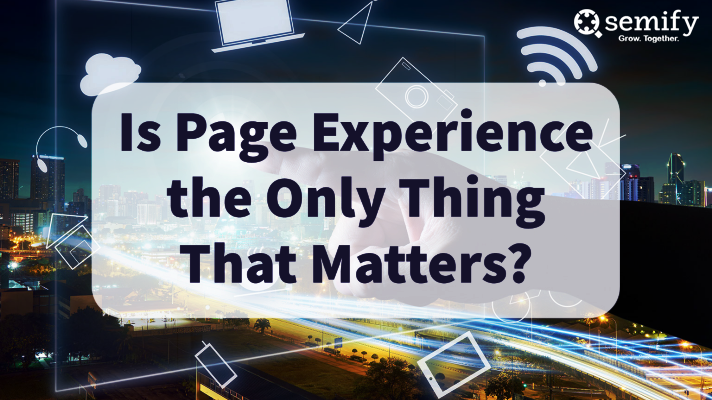 Sometimes when an algorithm update happens, business owners and even marketing professionals are inclined to believe that it’s the only thing they need to focus on. It’s easy to fall into this trap, especially if you’re worried about your site rankings being affected. In your mind, it might make sense to take an all-hands-on-deck approach and drop everything else -- but it’s important to remember that even with this algorithm update, this isn’t the only thing Google cares about!

Yes, page experience does matter -- and for a good reason. Google wants to provide web visitors with the best possible experience, which means highlighting the websites that follow best practices and remove barriers that could otherwise take away from user interaction with a page. However, this doesn’t mean you can simply focus on your site’s page experience and call it a day. This algorithm update doesn’t render other best practices invalid; it’s simply adding something to them.

In other words, you still need to focus on other areas of your web development and SEO if you expect to make progress with your site ranking. You still need optimized content, a visually appealing website, and authoritative backlinks. Google has said that when it comes down to two similar pages that provide essentially the same value in terms of content, it will use page experience as a way to break the tie. In that sense, page experience can be the thing that separates you from your competition. But it’s also not a substitute for quality content or other important aspects of your digital marketing strategy. It’s just one more thing you need to add into the equation -- but it doesn’t make the other calculations any less important.

What Should I Do to Prepare For the Update? 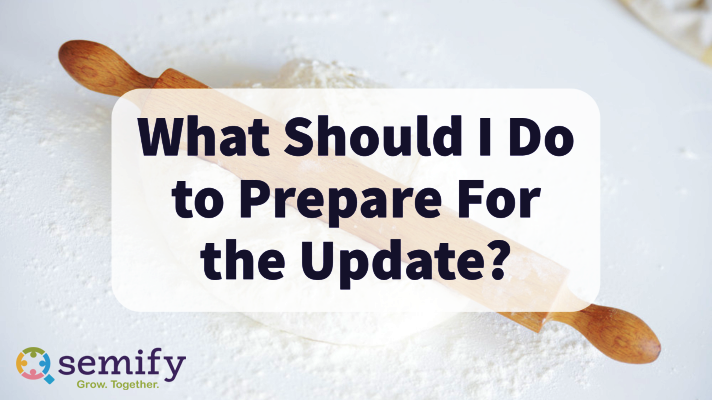 Now that you know more about what Google expects to see with this update, how can you make sure that Core Web Vitals’ SEO associations are positive ones for your business?

Basically, you need to start preparing now for this update. While we don’t have an exact date for the launch, we have it on good authority that the update will roll out in May 2021. That gives you a little less than two months to get your website ready for what’s to come. Depending on what kind of shape your site is in, you may have a lot of work ahead of you. Here are just a few steps that most experts are recommending you take.

What Happens If I Don’t Make Any Changes? 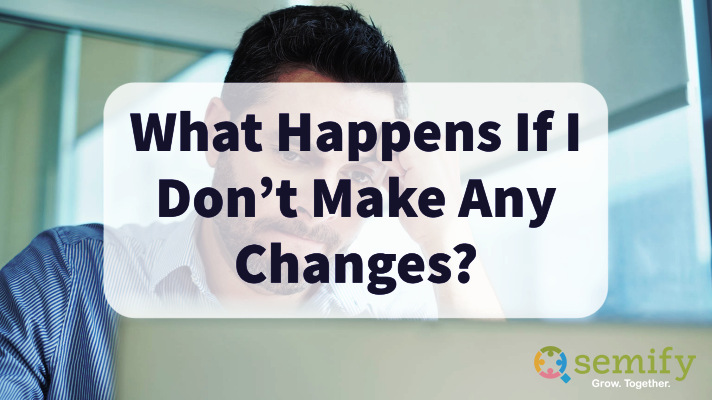 If you can’t see anything obvious that’s wrong with your site or haven’t heard any complaints from customers, you might be wondering whether it’s really worth it to implement some of these changes. It’s essential to remember that you can’t really be objective here -- and that you may not ever hear a peep from potential customers who abandoned your site due to its poor user experience. In other words, you probably don’t yet have good feedback that can tell you whether your site needs improvement. Until or unless you get that feedback, you’re going to take a big risk by ignoring page experience.

We don’t really know what we’ll see with Core Web Vitals SEO impact. The effect of previous algorithm updates has varied quite a bit; some updates hit the majority of websites, while others were restricted to sites within certain verticals. We have no official word as of yet about what we’ll see with this update. But unless you have a brand new website that was designed with Core Web Vitals ranking factors in mind, chances are good that you’ll have at least some small changes to make.

And if your website does need updating, it’s critical that you take action -- despite the fact that it isn’t clear how these metrics will be weighted in terms of overall site rankings. We do know that Google has said that poor page experience won’t automatically mean that your rankings will take a dive. In fact, Google stated that it will still be possible for sites that have been deemed to have a poor page experience to still rank well in Google search results. However, experts stress that that’s not a risk most businesses should be willing to take.

Failing to adhere to Google’s best practices during or after an algorithm update can have significant consequences. Your site could be penalized or lose a lot of ground in SERPs, which could mean that your site won’t show up as readily when relevant searches are performed. That can ultimately lead to major losses in traffic, sales, and overall brand perception. And even if your rankings aren’t impacted right away, consider that no one really wants to deal with a slow-loading website that doesn’t work well on mobile. Google might not always catch on right away, but web visitors do. They’ll be quick to abandon a site that provides a poor user experience. If you ignore these recommendations and keep your site as-is, it will be more difficult for you to compete -- and you’ll end up driving customers away in the end.

It’s true that page experience isn’t the be-all and end-all of SEO. But when Google gives you so much time to prepare, it’s important to sit up and pay attention. By understanding more about what search engines want to see, you can be proactive in your approach and make changes to your site (or your clients’ sites) to protect the progress that’s already been made through digital marketing.